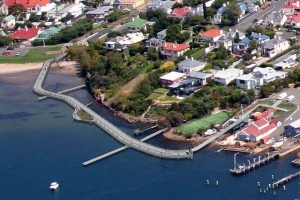 One of Hobart's great assets is the river but opportunities to spend time by the water is limited on the western shore. The Battery Point Walkway will be an iconic feature of the city providing an attractive link for visitors and locals between the waterfront and Sandy Bay. It will create a level, direct link for walking and bike riding from south of the city to the Hobart Waterfront, bypassing hilly local streets in Battery Point (such as the infamous Napolean St) or busy Sandy Bay Rd.

In contrast, the easten shore of the Derwent has an extensive waterfront trail network that runs past the bottom of residential gardens such as at Geilston Bay (pictured) and Bellerive Bluff, a similar scenario to what is proposed for Battery Point.
The City of Parramatta constructed a boardwalk around the foreshore of the Paramatta River in 2020/21 to create a level access to their CBD by bypassing a steep hill. The boardwalk is made up of 157 pre-cast concrete panels  that weigh up to 10 tonnes each. They have been designed to withstand extreme situations, including a potential ferry strike and high velocity floodwaters. Similar infrastructure could be provided around Battery Point. Details and photos of the Escarpment boardwalk can be viewed on the contractors website.
Counts carried out by the City of Paramatta after the boardwalk was installed found that 85,000 people used it in April 2021. 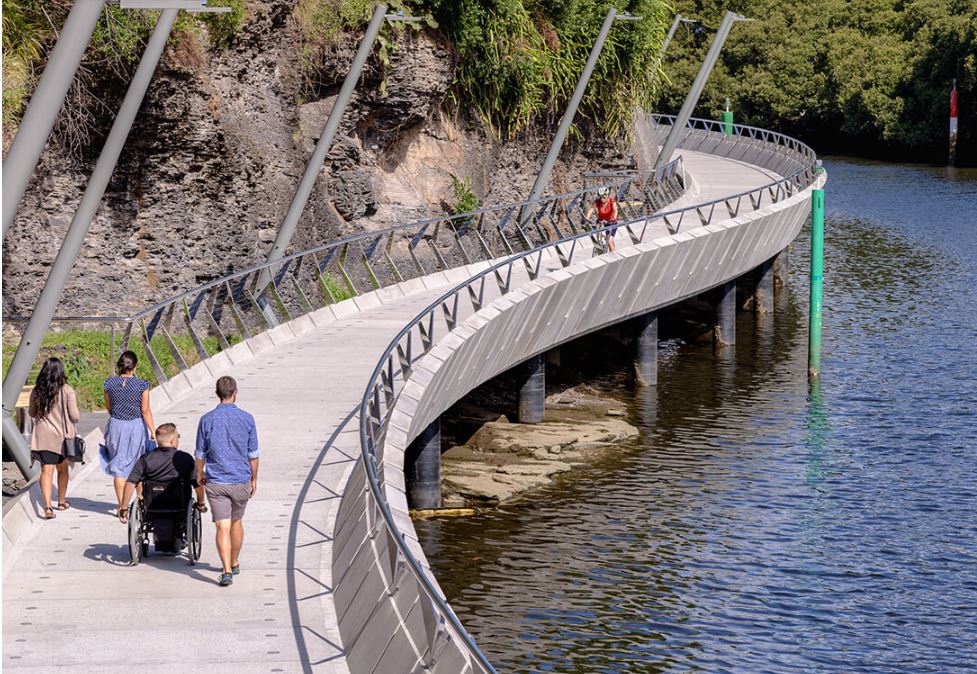 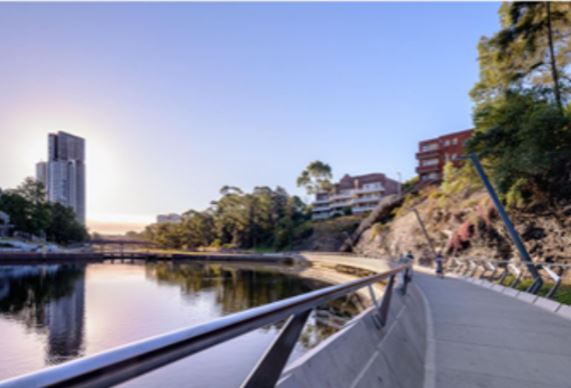 Photos from Abergeldie & City of Parramatta
Hobart City Deal funding
Feb 2019. The Hobart City Deal was signed on 24 February 2019 and represents a 10 year partnership between the Australian and Tasmanian Governments, and the Clarence, Glenorchy, Hobart and Kingborough councils. Included in the Deal is a commitment of $500,000 to progress the Battery Point Walkway.
Battery Point Walkway setback
June 2015. The Resource Planning Management and Appeal Tribunal refused Hobart City Council's application for a walkway around Battery Point, a key component in a Taroona to Hobart CBD cycling route. The Council will consider their next course of action. Following legal advice that there are no reasonable prospects of successfully appealing the Resource Management Planning and Appeal Tribunal's decision, the Councl has resolved that it will not pursue an appeal to the Supreme Court. The Council remains of the firm belief that faciltating movement in and around Battery Point and its foreshore is appropriate and would provide great community benefit and make a meaningful contribution to the amenity of Hobart. For these reasons, and at this stage, the Council is open to exploring possible avenues available to progress a project that faciltitates movement in and around Battery Point and its foreshore. The Council will undertake a workshop to give more detailed consideration to possible avenues, prior to any decision being made.
HCC's DA application underway
Oct 2014. After a technical hiccup which required withdrawal of the original DA application in January, a resubmitted DA was approved by the HCC development and environment committee on 6 October. See The Mercury website. It was approved at a full council meeting on 13 October 2014. This decision paves the way for construction of the long-awaited shared pathway. See the Mercury website for more.
State Government gives DA approval for stage 1
Nov 2013. The State Government has given approval to Hobart City Council to apply for a Development Application for the first stage of a walkway around Battery Point from Marieville Esplanade to the Battery Point slipyards, which would bypass Napoleon St hill. At the Hobart City Council meeting held on Monday 25 November 2013 a recommendation was made for a telephone survey of Battery Point residents and residents of Hobart to gauge the current level of community support for the project. The Council is expected to apply for the DA in January 2014.
16 Aug 2012. At the HCC Parks and Customers Services Committee meeting the following was minuted:
Battery Point Foreshore Public Access - Outcomes of Discussions with State Government
That: 1. The Council continue to work with the Active Transport (Walking and Cycling) Officer from the Department of Infrastructure, Energy & Resources to progress an application for funding to contribute to the construction of the proposed Battery Point public accessway under the Australian Government's Nation Building Program.
2. The design, based on the concepts developed to date, be finalised for the first stage of the accessway, being the end of the Marieville Esplanade roadway and footpath at the Sandy Bay Rivulet around the water edge of Battery Point to the Slipyards.
3. Subsequently, an amount of $75,000 be allocated in the 2012/13 Parks Infrastructure budget at the first quarter budget review to fund an update of the Battery Point Foreshore Study, a stakeholder engagement process and a specialist engineering consultancy.
4. The gathering of the evidence required to submit an application to Crown Land Services for a lease over the Crown Land where the proposed accessway would tranverse commence; including:-
(i) A consultant being engaged to review and update the 2004 Battery Point Foreshore Study; and
(ii) Commencing a community engagement process with stakeholders who hold existing Crown land leases or licences in the vicinity of the proposed route.
5. The Minister for the Environment, Parks and Heritage be advised of the process that the Council intends to follow.
6. A report on the final design and costings for state one of the Battery Point Foreshore accessway be provided to Council.

5 Oct 2011. The Mercury reported that Tasmania's Minister responsible for Crown Land Services, Brian Wightman, has set out a "road map" for the first time to Hobart City Council for assessment of the walkway plan. Mr Wightman, in a recent letter, told Hobart Lord Mayor Rob Valentine for the council to progress its proposal the Crown, as the landowner, needed to gain consent to lodge a development application (DA).
"Consent will only be provided to lodge a DA and should not be taken as approval for the project or as approval to undertake any works," he said. At the time of seeking consent the council would also need to apply to Crown Land Services for a lease or licence.
Lord mayoral candidate Jeff Briscoe, a longtime proponent of a Battery Point walkway, said while Mr Wightman's advice to the council was qualified it was the first time a definite process had been outlined to gain the necessary approvals.

Concept plan presented
Mar 2011. At the Hobart Council Parks and Customer Services Committee meeting of 17 February 2011 a report was presented which identified the main features of the design. These include:
The report noted that the accessway is consistent with the first stage of the Inner City Development Plan prepared by Jan Gehl. Of the 12 recommendations listed in the executive summary, it meets 7. These are that Hobart go from a car oriented city to a city that puts people first, a people oriented waterfront, a bicycle friendly city, a great city for visitors, a university city, a city with strong links to surrounding nature, and an expanded people-oriented city and the accessway is consistent with the Council’s Sustainable Transport Strategy 2009-2014 that seeks a connected high quality bicycle network.

May 2009. Hobart City Council has appointed consultants Pitt and Sherry to design a section of the proposed Battery Point Walkway from Marieville Esplandade to the slipway about 400m to the north, which is owned by the council. Ald Jeff Briscoe was quoted in the Sunday Tasmanian on 9 May 2010 that the concept design and costings would be done by 1 July. "Stage one is that Pitt and Sherry are going to get the designs for the Sandy Bay end so there will be some kind of structure over the mouth of the Sandy Bay Rivulet. From there to the start of Taylor Brothers, which is the slipway, there will be some kind of suspended structure, presumably some kind of jetty with posts. Then when you get to Taylor Brothers, by the Mariners Cottage, the walkway/cycleway will go up at a slight incline past the Mariners Cottage."

History
Proposals for access to the Battery Point foreshore, including a number of walkway options, have been in existence for decades. A walkway was documented in the 1995 Derwent River Management Plan and since that time, a number of proposals have been put forward including various standard walkways, a cycle path and a number of possible routes, all of which have been examined.

Ken White has produced background information on the saga of a walkway around Battery Point. Ken was part of the sub-commitee of the Hobart Bicycle Advisory Committee that met on 18 September 2001 to look at progressing the project. A Whalers Walk proposal was developed but did not progress.

The Mercury newspaper reported on 26 September 2006 that Ald Jeff Briscoe had asked the council to consider writing to the State Government for approval for the feasibility study and requested a report be prepared on what progress has been made in the year since the council agreed to lok at the "steps required to progress the concept of walkway" in October 2007. Both motions were accepted unanimously.

In April 2009 Hobart City Council undertook public consultation on the concept of walkway and put forward three options for providing access around the Battery Point Foreshore. The options included an elevated boardwalk, a path on top of a retaining wall or a scramble track. Feedback found that over 80% of people who were surveyed or made a submission supported the concept, with a majority identifying a need to make it a quality facility accessible to a variety of people, including people on bikes, parents pushing prams or wheelchair users.

Other examples of waterfront walkway projects
Bayside Council in Melbourne took 3 years to plan and consult on a 680m length of shared path along the foreshore in front of 'Millionaire's Row' in Brighton. Not only did the project involve the construction of a pathway, but also coastal rejuvination including rock groynes, stormwater drain extensions and beach restoration. The pathway was constructed in 2005. It has proved to be more popular than expected and Council regretted not building it wider.