Cycling South councils have been collecting annual data on the number of riders using various routes around Greater Hobart between 7am and 9am in the morning since 2010. The data helps to identify which routes are the most and least popular, how improvements in infrastructure change usage and where efforts to improve cycling need to be targeted.

Click here for link to counts data on Google Earth at the bottom of this page.

Due to poor and windy weather conditions on Tuesday 2 March the count was postponed by two days. As expected, commuter cycling numbers are down which is consistent with data from across Australia, which is attributed to more people working from home due to COVID.

It is interesting to see the impact of new infrastructure such as the Rose Garden Bridge across the Brooker Highway, which has attracted more riders into the city via Bathurst St instead of the Railway roundabout underpass. The UTAS buildings in the city (Menzies, Hedberg) appear to be attracting more riders onto Campbell St.

The National Cycling Participation Survey data has been included in the counts report, which shows an overall increase in cycling participation in Tasmania (likely attributed to COVID, increased bicycle sales and recreational cycling).

The full counts summary can be downloaded at the bottom of the page.

Counts were carried out at 55 intersections across Greater Hobart. The counts occurred before the COVID-19 interventions were adopted so data was collected under similar conditions to previous years. The weather was fine, with some clouds and low winds. 12 degrees from 7-8am then gradually warmed to 15 degrees by 9am. 0% chance of rain forecast. 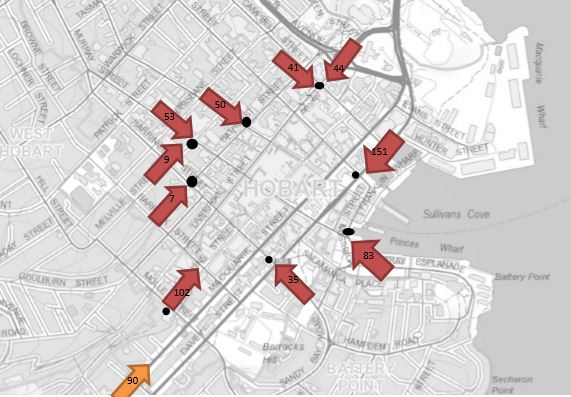 Counts are carried out on all the main access routes into the Hobart CBD. The main entry points from the North West (Murray St, Elizabeth St and Campbell St) have all shown a slight increase in ridership.

The Intercity Cycleway is a main feeder route into the city and the busiest cycling route. 37% of inbound riders on the cycleway come from the eastern shore (Tasman Bridge), with the remaining 63% coming from New Town and beyond.

The Hobart Rivulet Track at Collins St intersection has a 16% increase since 2018 whilst the numbers using Macquarie St has remained steady for the past 4 years.

Macquarie Point opened the pathway through the site in 2019 and counts carried out show that 41% of riders have moved off the Davey St path to the Mac Point path to avoid the unfavourable traffic signals at Evans St or to take a more direct route around the waterfront. This is an increase on the 27% who used the Mac Point path in 2019. 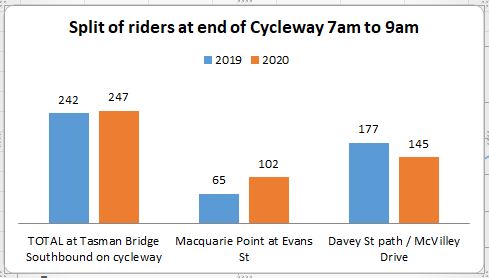 A full summary of the counts data can be viewed at the link at the bottom of the page. Click here.

The data is currently being analysed but the link to the raw data is at the bottom of this page. At a glance, the number of people riding to work has flatlined. Increased traffic congestion, lack of dedicated cycling space separated from motor vehicles, and incomplete cycling routes with stressful gaps don't make cycling to work appealing or attractive except for enthused and confident riders.

Just over 300 people use the Intercity Cycleway in the morning peak, with over a third coming to/from the Tasman Bridge and Eastern Shore. 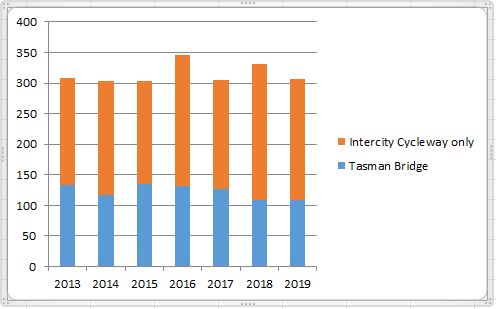 There is an increase in the number of people commuting on the cycleway at Berriedale, which may be MONA staff, but generally numbers on counted routes have not changed much since 2011. On-road routes with no cycling infrastructure have seen a decline in people riding, with significant drops at Springfield/Main Rd, Bowden/Tolosa and Main Rd/Chapel intersections. 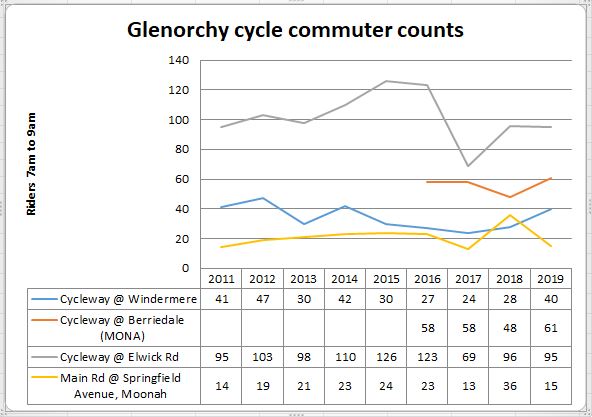 Kingborough
Taroona - Channel Hwy/Taroona Primary – 92 riders counted. Steady and consistent with previous years and emphasises the importance of getting the Taroona bike lanes improved.
Kingston - Beach Rd/Channel Hwy intersection - 57% increase in the number of riders going over Bonnet Hill between 7am and 9am from 21 in 2018 to 33 in 2019. The counter noted that a number of riders were seen before 7am so were not included in the counts. 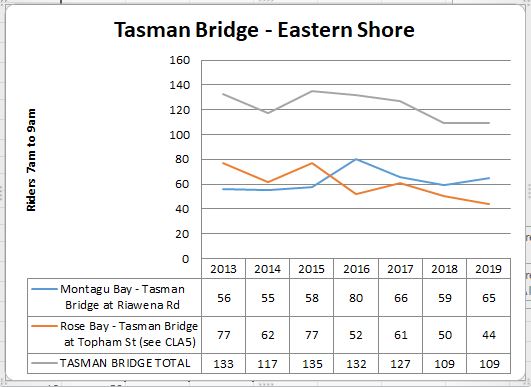 The graph shows a snapshot of usage on the Intercity Cycleway during a 2-hour period from 7am to 9am. Increased usage was also recorded on the Hobart Rivulet Track and Clarence Foreshore Trail. 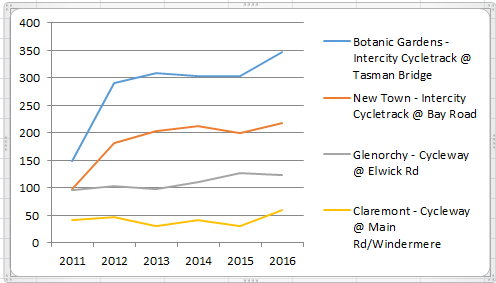 A 2-hour morning commute count was carried out in early March. A big thank you to all the people who volunteered their time to do the counts as the day was cool and damp.  For the first time gender was included in the reporting as women are typically an indicator of how comfortable a route is. The South Hobart Rivulet Track carries the highest ratio of women of all the count sites with over 40% of riders being female.
Generally numbers were consistent with previous years, with slight drops on a few routes.
The data helps us to understand how people commute by bicycle and the routes they prefer to use, which helps with network planning.

Counts were held on Tuesday 12 March 2013. Some of the overall findings were:

Cycling South councils have been collecting annual data on the number of riders using various routes around Greater Hobart since 2010. The data helps us to monitor trends and growth in cycling. 51 sites were counted across the region from 7am to 9am on Tuesday 13th March 2012.

May 2010. On the first Tuesday in March at 50 sites around Greater Hobart bicycle commuters were counted in the morning peak from 7am to 9am. For a breakdown of counts at individual locations see Count Sites in Tasmania. The counts are Hobart’s first comprehensive assessment of bicycle commuters and show that cycling is a transport option being adopted by a substantial number of Greater Hobart workers. Despite inadequate or non-existent cycling facilities in most parts of Hobart, people are still choosing to leave the car at home and travel to work by bicycle, relieving congestion, reducing greenhouse emissions, saving money and making a healthy change.
The counts were recorded during the morning peak from 7am to 9am at 50 sites across the four participating council areas - Hobart, Clarence, Glenorchy and Kingborough Councils. The counts provide an important snapshot of commuter cycling movements at a time when Hobart has very limited infrastructure for cycling. They show that despite the lack of bike lanes and paths people are using their bicycles to get to work. Just imagine how may more people could be riding if they were provided with comfortable and convenient cycling routes to get there.
At the busiest location on the Intercity Cycleway at the Hobart end 299 cycle commuters were counted between 7am and 9am. That’s almost 300 less cars coming into the city in the morning and competing for parking spots, and that’s just on a single cycling route. A permanent bicycle counter installed by Hobart City Council prior to Christmas on the Intercity Cycleway has been recording a peak weekday of 1100 cyclists per day, with the average around 900 per day since the installation.
On the narrow and wind-exposed footpath over the Tasman Bridge, on average 1 rider a minute crossed the bridge between 7am and 9am. That’s the equivalent of 120 less cars or 3 less buses driving over the bridge in the morning peak. Even at sites over 10km from the CBD cycle commuters were evident. In the morning peak 54 riders an hour were counted on the Intercity cycleway at Glenorchy.
The counts also give us an insight into cycling patterns. For example almost twice as many riders use Clarence St in Bellerive than the foreshore trail which runs parallel, which indicates that fast and direct routes are just as important to commuters on bikes as they are for drivers.
Cycling numbers were higher on routes where bike lanes or cycleways have been provided. This shows we need to start providing infrastructure in areas where it is lacking. The Hobart Regional Arterial Bicycle Network Plan provides us with a blueprint for developing a cycling network but it will take time and resources to build it.
With the State Government Department of Infrastructure, Energy and Resources recently releasing their Walking and Cycling for Active Transport Strategy and their Urban Passenger Transport Framework, it is clear now that Governments of all persuasions have realised that providing facilities for individuals to walk, bicycle, use public transport or even park and ride is the way of the future.
Collecting data through initiatives such as the Super Tuesday bicycle counts helps to address the urban myth that no one rides bicycles in Hobart.

You will need Google Earth on your computer in order to view data.